AFDX® /ARINC 664 Part 7 is one example of a deterministic, Quality of Service (QoS) ADN technology for commercial-freight and passenger aircraft. Electronic systems that interface and utilize the AFDX® network installed at various stages of its production cycle. Designers and builders understand the importance of monitoring the aircraft’s data-bus as they bring online avionics systems. The captured data is valuable for both system troubleshooting and design improvements.

However, the assembly of just one passenger plane could take from four to six weeks to complete. An ideal solution is a long-duration recording system that can capture bus data from the start of the aircraft’s assembly until its completion. It’s an opportunity to archive critical data for future systems analysis. Engineers and technicians can present bus data in multiple formats. The first could be in a simple text-based form, while the other design features advanced, albeit realistic, visualizations.

Such software typically interfaces directly with the aircraft for real-time analysis and limited logging capability. However, a full-rate data recorder is better, especially when there isn’t an opportunity to operate and real aircraft. Archived data from a previous process is valuable. It can be exported or played back as originally captured to the recorder’s disk-based volume(s). A conventional bus analysis tool should not notice the difference between recorded aircraft data and data streaming directly from the aircraft.

Ask us how Daqscribe Ethernet Recorders can enhance your aircraft data-bus analysis process with an advanced aircraft network recording solution. 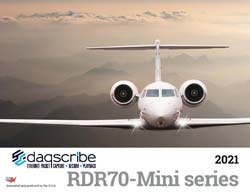 Send us your data recording requirements!

We’re a digital data recorder company that offers both COTS and custom recording solutions. Ask us how we can help with your unique and critical data recording needs.

Innovated and produced in the U.S.A